The breed developed centuries ago in Bologna Italy and were a particular favourite among European nobility. It is known that Madame Pompadour, Louis XIV of France, Phillip II of Spain, Catherine the Great of Russia and more recently Marilyn Monroe have all owned Bolognese.

Bolognese almost became extinct as the nobility fell throughout Europe. The dogs became street dogs, it is then that sailors took an interest in them as they became great rat catchers on the ships! This is thought to have led to the other more famous breeds which come from the Bolognese, namely the Bichon Frise, the Havanese, the Maltese and the Coton de Tuleur.

Grooming is an important part of the breed maintenance but takes less time than it initially appears. A twice weekly 15 minute comb, with a wide tooth comb should suffice. It is a non shedding coat, therefore regular combs are necessary. Regular bathing also assists the quality of the coat.

The Bolognese are a highly intelligent breed which do bond well with the family and other dogs, they bark to alert but are not a yappy breed. They fit easily into the family routine, and are just as happy going for lots of walks as they are curling up on their owners lap! 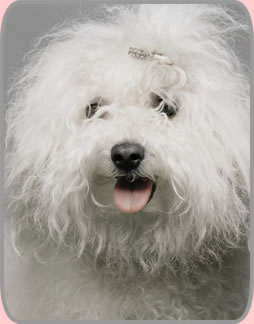