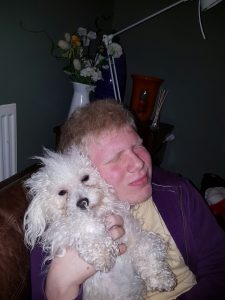 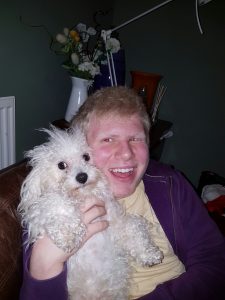 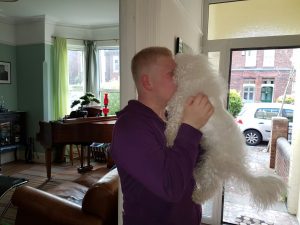 My name is Tolga Eskici, I’m 14 and I live in Bedford. It’s almost a year since our family received our Bolognese dog called Oreo, and in all honesty, it was quite an overdue experience for what had been quite a sterile code of conduct around our household for quite a long period of time with me and the rest of my family. Through a majority of my years in middle school I had spent my time distant from others, this was greatly defined in my lack of social skills with the family as I gained more pleasure in my free time through glancing down a glass screen connected to a keyboard, and while I still do adore the computer to quite a large degree, things have started to get easier for me in the socialising and bonding department for me. I think that my obsession for keeping track of the internet’s latest updates on specific aspects that I anticipated consumed me quite a lot of the time in the house. I also think that I lost a huge amount of responsibility with assisting in our home. I was pretty lacklustre in overall communication, hence why I had so many conflicts regarding certain things with my parents that looking back probably didn’t warrant the waste of time that I enforced through my naivety, and broken-down methods of addressing particular topics with others. My poor social skills also meant that for four years I had a pathetically weak friendship circle and quite a faint interaction with others in middle-school, and during my time of being bullied, I couldn’t have enough courage or capability to seek help and speak in a way that would resolve the situation calmly.

I was actually pretty reluctant and very adamant against the idea of owning a dog in our house, and the one that I saw while cute, did not satisfy me in the slightest. I don’t exactly remember my moral compass right now regarding that time, but I do know that I was least impressed. I was vehement on my grudge against him and I remembered that if we did get him that I was planning to take it down to the gritty finish with my family, another painfully obvious example on how I was more concentrated on looking on the negative side of things.

This would later all drastically change in January of 2015 when I was introduced to a compact-sized dog with a thick-furred white coat, beady black bulging eyes, delicate flappy ears and a large dark round nose. The very same one I had doubted for so long. I still vividly remember the first night that he stayed with our family. Locked in the far-right corner of our kitchen in the embargo of his cage, he found it immensely difficult to sleep in his efforts to adapt to his new environment and ultimately, his new home. It was impossible not to hear his weeping even in our living room which was quite the distance from the corridor, I was just with my mother talking but my words were quickly crushed under the weight of the yaps echoing from our kitchen. I slowly went myself to investigate and saw a sight that reflected a lack of a sense of direction, he was just as lost as I was. I thought that I could fumble a few words of encouragement as if he was human to raise spirits, but he just stood frozen, I actually put my finger through a small gap in the cage expecting some sort of immediate reaction for him to lick me, but my stereotype failed to generate the results that I had hoped for. He just stayed there, frozen as if he was lost in space and time, he was no quiet through. Realising that he didn’t respond in the ways that I wanted only increased my animosity towards him. The next day, which would be my first full one with Oreo, I tried to communicate once more, but I failed miserably, our bond was weak. After a few incidents with control of his personality, I at the end of the day couldn’t handle it anymore. I drizzled tears over my face as I cried to my mother in a desperate plea to try and get rid of him. My mother saw my uncomfortable stature and agreed to the terms, that if I didn’t get along well or he didn’t settle enough for me, he would cease to be present in the household.

Fast forward eleven months, and I can’t even think of asking to remove him. After showing a degree of authority to try and handle his fierce personality. The gentle side of this wonderfully fluffy creature emerged soon enough. He has become a part of the family, and when he sleeps, he can even be mistaken as a part of the furniture. His eyes pop upon my arrival at home from school, after walking a long distance he greets me with all his delight by trying to jump on me and licking me everywhere. The pleasure of him licking me is something I adore as I know he’s conveying kind emotions towards me. I love cradling him in my hands and he has changed my life dramatically, and even that feels like an understatement. Whenever we take him for walks, I can always sense the joy that he seems to be so buoyantly express through the intense wagging of his tail, as if we are one being. I can’t express how refreshing it is to see him whenever I can, and when he rolls over for me to rub over his belly, or to play a game of tugging a plush, I can only try to imagine the horrific dullness of the atmosphere around me without these joyous activities and moments we share together.

Brushing him and bathing him has definitely brought me and my mother together again as well and I am far more social than ever before. And there’s no way I could have accomplished all of this without my favourite Bolognese, Oreo.